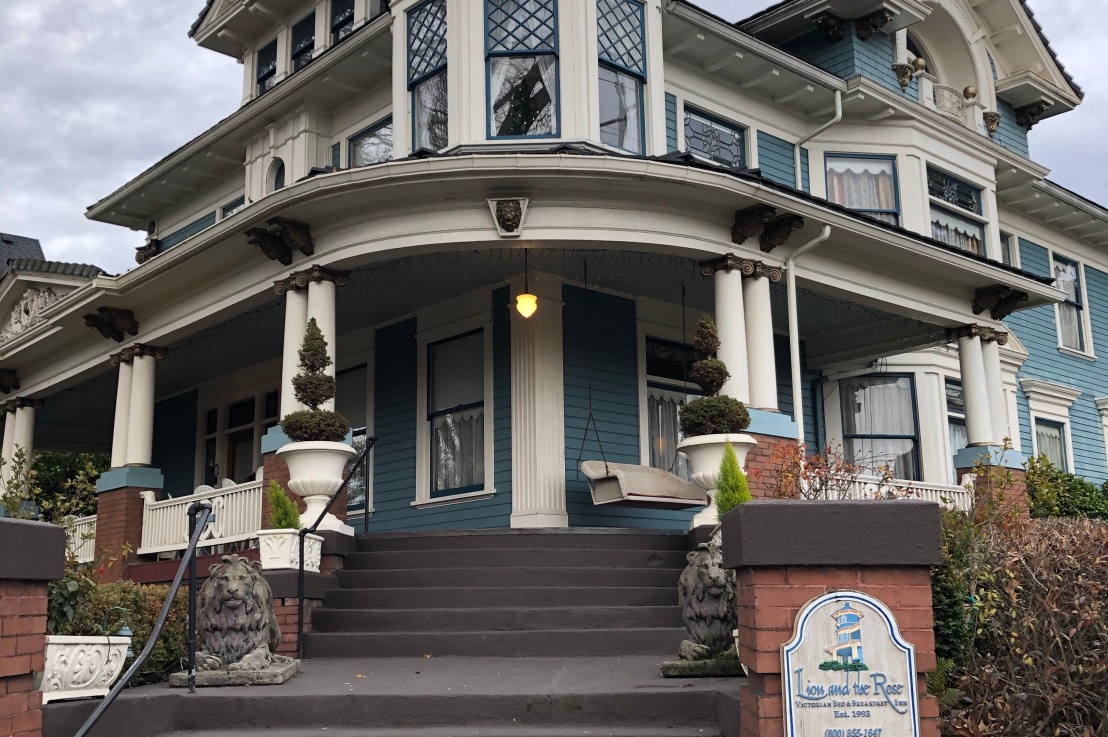 The Lion and Rose was a delightful reminder of the wealthy early settlers of Portland, but obviously it was not built with sound insulation in mind-talk about paper thin walls. The delightful owners have it on the market-but I enjoyed my stay there despite the early morning sounds of my neighbours.-and plumbing sounds at 2.30 am of a frisky couple having a spa-as you do in the early hours.

At Shasta Mountain we stayed in McCloud House in the town of McCloud-and old logging town. Not a Scottish person in sight! We only need to shove the champagne bottle in the snow which is a huge advantage!

We stopped here for New Years Eve on our way back to San Francisco. It was magical arriving in the dark at 5.00pm with all the Christmas lights twinkling on the wooden verandahs. The hotel was built around 1916 for the loggers but has hosted such luminaries as ‘Spanky’ and Alfafa’ from The Little Rascals. My bedroom was a delightful interpretation of American decor with no plumbing sounds!

Before leaving Portland we experienced a Saturday Drag Queen Brunch . somewhere on the east side. I did find Portland confusing with its names -it is bit like the most boring person in the world named the streets..NE West..SW East.. I never knew where I was. To my horror everyone else, in this photo, had more makeup on than me!

McCloud was near Shasta and thankfully we did not have to do a tour of the Shasta Dam one of the largest in America- a 15 million ton dam. Apparently there were some really ‘cool’ crystalline caves as well and a large nesting ground for bald eagles.

Instead we hung out at the charming historic McCloud Hotel with an unusual assortment of European vacationers who did not seem to know it was NYE. In bed by 9.00 and no eye contact with anyone. The definite highlight for me were 2 hyperactive boys whose parents were oblivious to the chaos they were causing as they bounced off the walls while throwing the Christmas decorations and screaming in German. I may have said something..?

NYE dinner was surprisingly good at the Sage Restaurant but there was not much happening after that- we did venture into the one and only bar which was doing its best- called The Meat Market.it must have been a play on words..not much meat for the pickings.

Then after all the frivolity, it was back in the wagon and a long drive to the Bay Area. For me it was a flight home to the devastation- of Australia burning- the black and stark remnants of the unprecedented fires, the unique wildlife destroyed, with grave threats to their ecosystems, thousands of homes lost and so many lives. AND a right wing government which is in climate crisis denial!!

This site uses Akismet to reduce spam. Learn how your comment data is processed.